The City of Waterloo demolished the former American Legion building located at 619 Franklin Street in mid-August.  You can see a video of the activities here.  The City investigated the site under its EPA Brownfields Petroleum Assessment Grant prior to acquisition.  Phase II ESA results cleared the path for its redevelopment.  The City is selling the property to the adjoining KWWL news station as part of a Development Agreement that will ultimately result in a multimillion-dollar, multiyear renovation of the 1914-vintage building it has occupied since 1958.  The plan is to restore the four-story building, originally called the Overland Hanson Building, with a historic designation.  Phase one of the project will include restoration of the building’s exterior- including the first-floor glass façade. 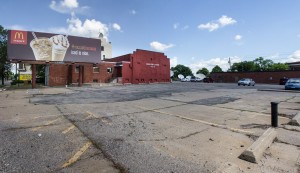